As soon as I entered the field of School Counselling I knew I had to be an advocate. I thought as a teacher I knew what School Counsellors did. Was I wrong!!!

Since then my colleagues and I have advocated at a district level to bring more awareness to what we do.  Has it made a difference? YES! YES! YES! Our district is one of the best in the country when it comes to supporting , understanding and recognizing the work that School Counsellors do.

I have also advocated at a provincial level by being one of the voices and president of the then Alberta Guidance Council. Today my friend Erin Luong has taken up that advocacy role in the ATA Council Of School Counsellors and they are lucky to have her.

At a national level in 1999 , I was part of the first delegation of Counsellors to go to China along with my leader and friend Maria de Cicco as part of the Canadian Counselling and Psychotherapy Association . My administrator and district supported me as a School Counsellor advocate on this journey. It was a once in a lifetime experience that I will treasure and never forget.

Strong leaders are needed to be the voice along with School Counsellors . We need someone in Canada who has the same powerful, inspiring voice as Michelle Obama does here:

Today although I am semi retired I still want to advocate. I believe School Counselling is one of the most important positions that every school still needs , maybe now more than ever.

So I say Canadian School Counsellors raise up your voices, if you want change , make it happen … be the change!!!!! We need your voice! Being silent won’t produce the changes needed across the country. You are valuable. You do matter . You are needed and you do make a difference.  YOUR VOICE MATTERS!

Want to know how to be a great advocate just follow the #SCCHAT feed on twitter to see how it’s done. Let’s join in Canadians with our world counterparts who are advocating and being the voice for School Counsellors worldwide. 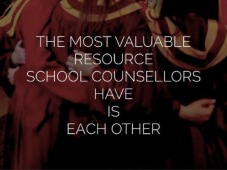 Hope you’ll join me and @counselorPCE for a very special #NSCW18 #scchat this Wednesday at 8:30PM ET! Time to celebrate our favorite profession!

Susan Spellman Cann is a Registered Psychologist who loves working with young people. She hopes you will join her as she shares information that is relevant to School Counsellors , Counsellors, Psychologists, parents, students and anyone else interested in ideas she may wish to share.